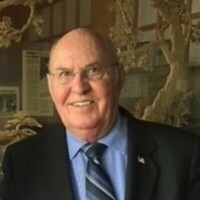 Donald W. McRady (Don) of Spring Hill, Tenn., was welcomed into heaven on June 20, 2022, at the age of 85. Don originally was from Lewisburg, graduating from Marshall County High School in 1954. Don, along with his identical twin brother Ronald, attended Middle Tennessee State University in Murfreesboro where he graduated with a B.S. degree in Industrial Arts. After graduation, Don worked for Brown Engineering in Huntsville and was proud to be able to use his drafting skills on several of the Apollo projects. Don met Fay “Sis” Glasgow of Cumberland Furnace through a mutual friend in Nashville while both were serving in the Air National Guard. He was an Airman Second Class, and she was a recently promoted Captain. They married in December 1964 at Church Street Church of Christ in Lewisburg, and Don often would say that she pulled rank on him. Through the years, Don worked in a variety of industries from drafting and engineering to managing computer systems to real estate and auctioneering. Don retired from his second career after working 25 years for Walmart in Murfreesboro and in Spring Hill. Don volunteered for decades (1975 to 2008) with the Cub Scouts and Boy Scouts of America, working with the Longhorn Council (Texas), Middle Tennessee Council, Tennessee Valley Council (Alabama). He served at numerous National Jamborees at Fort A.P. Hill, Fredericksburg, Va. and was a leader at Philmont Scout Ranch, N.M. Don received many awards for his service over the years and earned his Bachelor, Master’s, and Doctorate of Commissioner Science. He served on the Middle Tennessee Council Executive Committee, Trail of Tears New Charter Committee, and Chairman for the District Nomination Committee. Don received the Silver Beaver Award in 1993, one of the highest adult awards for character and service and received the Members of Churches of Christ for Scouting Faithful Servant Award in 1997. He enjoyed watching ballgames, listening to classic county and big band music, sipping a hot cup of coffee, and napping. He would say that days when he just wanted to stay in his robe were his “casual days,” and he excelled at corny dad jokes. Don also loved music – playing the saxophone, attempting to play the bagpipes, whistling the most beautiful tunes, and singing with a lovely tenor voice. Don always stood firm on his faith, beliefs, opinions, and integrity. He and Fay attended and were members of Southern Hills Church of Christ in Franklin. Don is survived by his wife Fay of 57 years, son Andrew (Julie), daughter Jodie (John), and grandchildren Siree, Aran, and Katlin. He also is survived by his identical twin brother Ronald McRady (Katrina) and many nieces and nephews on the McRady and Glasgow sides. He was preceded in death by his parents George Craig and Celia Jane McRady of Lewisburg and by his oldest brother George Ewing McRady (Mary) of Midlothian, Va. Visitation will be on Friday June 24th from 9:30am to 11:00am with service following at 11:00am at Dickson Funeral Home, 209 E. College St., Dickson, TN 37055. The family is grateful for their church families’ prayers and for the loving care from Willow Springs Assisted Living staff and administration. In lieu of flowers, please consider a memorial donation to Churches of Christ Disaster Relief Efforts, P.O. Box 111180, Nashville, TN 37222-1180 or to a charity of choice.
To order memorial trees in memory of Donald Wilson (Don) McRady, please visit our tree store.