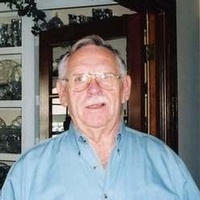 Dorris Kenneth Greer, age 89 passed away on Wednesday, February 15th at his residence in Dickson, TN.  A lifelong resident of Dickson County, he was born on June 14th, 1927 to the late Tom and Ocie Ora Simmons.  In addition to his parents, he was preceded in death by his wife, Doy Ludene Greer; brother Ilie Greer as well as an infant brother; sisters Charlotte Hooper, Dorothy Overton, Dell Greer and Karene Baker. Mr. Greer served his country in the United States Navy and was on the USS Iowa from September 1945 to November of 1946.  He was a retired business man and owner of the Dickson Dairy Queen.  He was a member of Parkers Creek Baptist Church.  He is survived by his two daughters, Donna Lai (Harold) of Rancho Cucamonga, CA, Corin Greer of Dickson; two grandchildren, Kenny Russell and Karen Douglas; and three great-grandchildren, Jessica Saunders, and John and Adam Russell. Funeral services will be held on Saturday, February 18th at 1:00 p.m. from the Chapel of Dickson Funeral Home with Brother Nathan Wilkerson officiating.  Interment to follow at Weems Cemetery with military honors.  Visitation with the family will begin on Friday, February 17th from 4:00 p.m. until 8:00 p.m. and on Saturday from 10:00 a.m. until time of service. Arrangements by Dickson Funeral Home, 209 East College Street, Dickson, TN  37055.  Phone 615-446-2313.  Online condolences may be left at www.dicksonfuneralhome.com.
To order memorial trees in memory of Dorris Kenneth Greer, please visit our tree store.