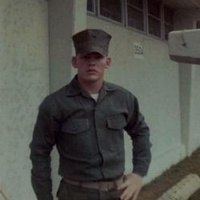 Danny Ray Cauthern: July 7 1949- October 3, 2016. Widower of Hiroko Cauthern and ex husband of Janice Burgess. He was the youngest of three children. His older sisters are Judy Cauthern Wight and Carolyn Cauthern Finch. His mother Lois Cauthern passed in 1993 followed my his father William Cauthern in 2010. His children are Jennifer Cauthern-Allen, Christine Cauthern Lewis, Luke Cauthern and Tammy Cauthern. Step-children Russell Smith and Jennifer Thomas.  Sons and daughter in laws: Robin Allen, US Army Chief Warrant Officer Ken Pease, Derek Lewis and Rachel Cauthern. 10 Grandchildren: Merissa Allen, Alexandra Jackson, Bella Cauthern, Shelby Jackson, Taylor Lewis, & Madison Lewis,  Jordan, Taylor, Emily Thomas and Cameron Smith. His nieces are Ginger Christian, Nikki Shepherd, Missy Harrison, Donna Hunter and nephew Frankie Hunter. Life and Accomplishments Played baseball football and basketball at William James High in White Bluff TN  Volunteered as a United States Marine Corp and achieved the rank of Sargent during his tour of duty in the Vietnam War. He served from October 1, 1968-December 15, 1971.  While serving in he taught baseball to children in Okinawa where he met wife Hiroko Ganaha (gaan nah ha). They were married for 16 very happy years.  He worked the City of Dickson and later taught electronics at the Dickson Vocational School He ended his career as a pawn broker where he was surrounded by guitars and guns. Two of his favorite hobbies.  Danny loved the outdoors and to deer hunt. He usually hunted with a recurve bow or muzzleloader. He always felt it was more sportsmanlike. He would always be sure to use the meat or donate it. Mostly he came home empty handed or with a few arrowheads he loved to collect. We suspect he liked the quiet of the woods where he most loved to be. Danny was a people person. He loved to share music and taught many people how to play the guitar and played until he broke his arm early this year. It was one of the things he loved the most. He was also a gun enthusiast and enjoyed the thrill of a new and unusual find and the subsequent bargaining.
To order memorial trees in memory of Danny Ray Cauthern, please visit our tree store.